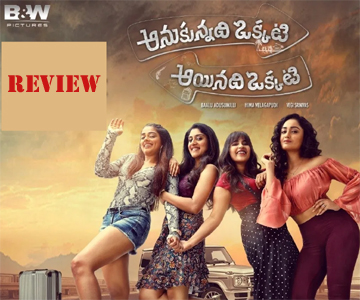 A few bold dialogues from the movie which are enough to tell how will the movie be. With such dialogues getting highlited in the trailer, a section of society is very excited to watch the movie. So how is the movie? Let us read the movie review.

Dhanya Balakrishna is a software employee. Tridha Choudhury is a reporter. Komali Prasad is a fashion designer. Siddhi Idnani is a home maker who is not satisfied with her married life. All these 4 girls are childhood friends. They are bold girls. They go to attend a friends wedding in Goa. There they meet a boy plan to satisfy themselves their fantasies. Thinking that he has died, they plan to hide his body. Meanwhile police start suspecting the 4 girls. What happenes later? Did the boy really die? What happens at the end? Answers to all these questions form the movie Anukunnadi Okati Ayyindi Okati.

This movie was shot inspired by the Hollywood movie Rough Knight. But it failed to impress the audience. Just to showcase the lifestyle of metropolittan girls, few bold dialogues were written. But not a single dialogue is impressive. None of them make us laugh. The main comedy track of the film, spoilt the show completely. The director tried telling something about illegal affairs. None of the heroines impressed the audience.

Of the 4 heroines, Komali Prasad Siddhi Idnani have done well. Dhanya Balakrishna Tridha were just present in the movie. There are no notable scenes which will make the movie glamorous. Character done by Sameer is routine. Chota Mota Artist BHaskar has got a remarkable role.

Alongwith this concept, if comedy would have worked out well then the movie would have become a superhit. But the comedy in the movie tests the audience patience. And thus the movie becomes boring.